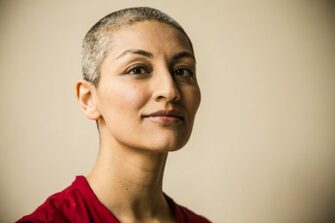 ​​Shailja Patel is an internationally acclaimed Kenyan poet, playwright, theatre artist, and political activist. She is most known for her book Migritude, based on her one-woman show of the same name, which was funded by the Ford Foundation. CNN characterizes Patel as an artist "who exemplifies globalization as a people-centered phenomenon of migration and exchange." She divides her time between Nairobi, Kenya, and Johannesburg, South Africa. In Kenya, she is very active in terms of equality and peace. She is a founding member of Kenyans For Peace, Truth and Justice, a civil society coalition that works for an equitable democracy in Kenya. Her book, Migritude, was published by Kaya Press in 2010.
Jodi A. Byrd is a citizen of the Chickasaw Nation of Oklahoma and associate professor of English and Gender and Women's Studies at the University of Illinois at Urbana Champaign where she is also a faculty affiliate at the National Center for Supercomputing Applications.  Her research interests include critical Indigenous studies and governance, critical technology studies, indigenous feminisms and sexualities; she teaches Indigenous critical theory, settler colonial studies, postcolonial literatures, videogame studies, critical technology studies, Indigenous feminisms, queer Indigenous studies.   She is author of The Transit of Empire: Indigenous Critiques of Colonialism. Minneapolis: University of Minnesota, 2011.
Other Featured Speakers 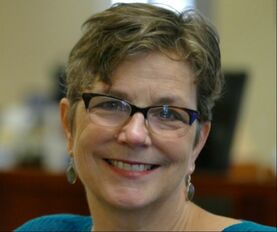 Settler Colonialism and The Unsettling of America:
Toward Pedagogies of Responsibility
Friday, March 29
​1:30 pm
203 Porter Building, EMU
Rebecca Martusewicz is a Professor in the Department of Teacher Education  at Eastern Michigan University, and one of the founders of this EcoJustice and Activism Conference.  Her scholarship and teaching have been focused on EcoJustice for over 20 years during which time she has worked with many others across the United States, Canada, Europe and beyond to address the cultural foundations of intersecting ecological and social crises.  She is author of several books including A Pedagogy of Responsibility: Wendell Berry for EcoJustice Education (2019); Art, EcoJustice, and Education, edited with Raisa Foster and Jussi Makela (2019); EcoJustice Education: Toward Diverse, Democratic and Sustainable Communities with co-authors Jeff Edmundson and John Lupinacci (2011, 2015); and Seeking Passage: Post-Structuralism, Pedagogy, Ethics (2001).  While she will retire from EMU in August 2019, she has recently been awarded the position of Docent in the School of Education at the University of Tampere in Finland where she hopes to continue to work to bring together graduate students and faculty from Finland with students and scholars from the US around these important challenges.
Featured Panels
Changing the Soil: Re-Developing Ypsi's Southside
Friday, March 29th
11:10 am
203 Porter, EMU
Introduction: Rasheed Atwater, Eastern Michigan University 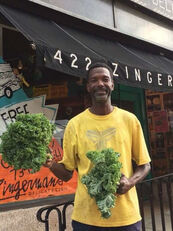 Melvin Parsons, We the People Growers Association and Opportunity Center:
I was born & raised in Detroit by my grandparents, (wonderful folks). I started making bad choices early in life, and eventually spent 13 yers of my life incarcerated. I had a 12 year drug addiction (now sober almost 9 years).  I moved to Washtenaw County May 8, 2004, got a BSW in social work from EMU in 2016. I co-created a mentor program in 2015 called A Brighter Way which mentors men & women returning home from incarceration.  I now lead an effort to bring healthy locally grown food to the people of Washtenaw County, by developing a successful urban garden that supplies local businesses with healthy vegetables.  I've been on the cover of magazines, newspaper articles and radio interviews. 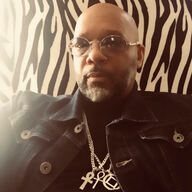 Bryan Foley, Parkridge Community Center:
​I was born, raised, and  now reside on the south-side of the City of Ypsilanti.  I am the  City of Ypsilanti Sustainability Commissioner, founder and organizer of BLACKPAC (political action committee) of Greater Ypsilanti and Washtenaw County, founding member of A3C (Association of African American Contractors of Washtenaw County), entertainment chairman of the PARKRIDGE SUMMFEST JOE DULIN DAY, originally and informally called the Black Arts Festival.  I volunteer at Parkridge Community Center.  I am a licensed electrician and licensed electrical contractor, owner of Aarneth Electrical Solutions. I am the son of Jesse and Valeria Foley, father of Joseph, Eric, Jacori, Bryce and Britney, Brother of Kathleen, Kenneth, Kyle and Matthew. 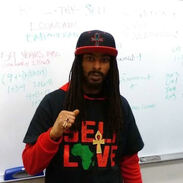 Brother Noah Rucker:
​I am a grassroots community leader and creator of Booker T. Washington holiday. I am an urban farmer of two community gardens, teaching health economics home school curriculum free year-round to the community since 2016.  I have been a professional photographer since 2009, now building an online store for spring 2019 called Quality Culture.  I hope to become the future mayor of Ypsilanti, MI.
The Urgency of Activism in Our Times
Saturday, March 30th
1:30 pm
203 Porter 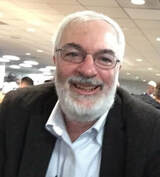 ​Richard Stahler-Sholk is a professor of political science at EMU.  He is active in local immigrant rights and sanctuary groups, Latin America solidarity, and human rights work with indigenous communities in Mexico. 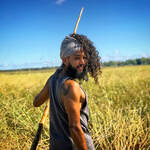 ​Antonio Rafael Cosme is a Xicano Boricua outdoorsman, educator, writer, farmer, artist, and entrepreneur from #SWDetroit. He co-founded the #RaizUp collective for decolonial edu-tainment and organized with the People’s Water Board and Detroiters Resisting Emergency Management against the neoliberal policies pushed on Detroit. Beyond resistance, Antonio started #SWBeetroit a beekeepers coop and #SWGrows to work on greening the hood and connecting young Detroiters with nature.

​Alexander Nuttle got his start in activism by advocating for the Black Student 10 Point Plan. Throughout his years at EMU he has taken part in protests in solidarity with Black and Native students, managed a canvassing team for an electoral campaign that operated on in Ypsilanti, and has taken part in the anti-privatization campaigns on campus. Alex is currently working with the Huron Valley chapter of the Democratic Socialists of America as a part of their communications committee and working on an anti-charter school campaign with the Detroit chapter of the Democratic Socialists of America.

​Sanyu Lukwago is a graduating senior studying political science with minors in sociology and communication. She is an event programmer for the Women’s Resource Center and a fellow with the Michigan Student Power Network. Her future plans include furthering her education and in time, broadening the capacity in which marginalized populations are positioned, perceived, and supported in society.

​Laila Hamdan is currently focused on supporting workplace organizing efforts. Her past involvement in social movements has included organizing around international solidarity with Palestinian and Latin American grassroots struggles. 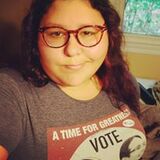 Michelle Lietz is currently a PhD Candidate at the University of Manitoba specializing in Indigenous Literature. While at EMU, she was vice-president of the Native American Student Organization and devoted significant time to education, outreach, and activism around the use of Indigenous images and names as mascots. While much of her work is centered on representation, her current work also addresses the intersections between land and water relationships, sites of extraction, and Missing and Murdered Indigenous Women, Girls, and 2 Spirit (MMIWG2S) people.
Also participating on the panel:
​Philip Patterson is an alumni student activist from EMU. On campus, he worked on human rights and labor solidarity campaigns. He also worked on ending the EAA agreement with EMU placing Detroit schools under emergency management and promoting student rights generally. Since college he has worked on peace activism, renters/housing rights, ecological regeneration, and critical technological integration. He is currently developing a non-profit farm based on bio-intensive methods, with the goal of carbon negative production.